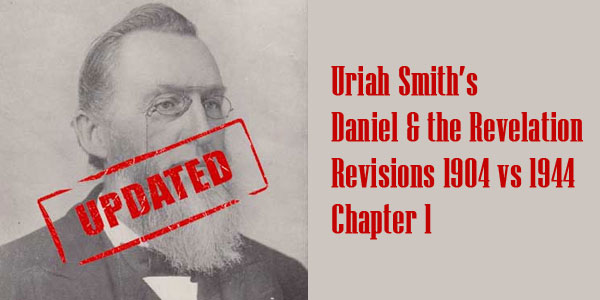 The way my wife and I began to compare Uriah Smith’s revised book is I read Daniel and the Revelation – 1904 printed date (This is the 1897 version) while my wife listened and followed simultaneously reading the 1944 revised edition. There are a few minor word changes and sentence restructuring that we have not included due to time. Please note that the page numbers do not harmonize with each other.

The paragraph below was deleted from the 1944 version p.19.

I appreciated this information. I don’t understand why the revisionists would remove it out of Uriah Smith’s book.

It was interesting that some people thought that the word “eunuch” meant office rather than condition.

The paragraph below was deleted from the 1944 version p.23.

This paragraph highlights that following God’s ways and principles is noticeably better for man than following the best ways of the world. It reminds me of Psalm 119:99 I have more understanding than all my teachers: for thy testimonies are my meditation. The above paragraph also harmonizes with the book Prophets and Kings.

True success in any line of work is not the result of chance or accident or destiny. It is the outworking of God’s providences, the reward of faith and discretion, of virtue and perseverance. Fine mental qualities and a high moral tone are not the result of accident. God gives opportunities; success depends upon the use made of them.

While God was working in Daniel and his companions “to will and to do of His good pleasure,” they were working out their own salvation. Philippians 2:13. Herein is revealed the outworking of the divine principle of co-operation, without which no true success can be attained. Human effort avails nothing without divine power; and without human endeavor, divine effort is with many of no avail. To make God’s grace our own, we must act our part. His grace is given to work in us to will and to do, but never as a substitute for our effort. White, E. G. 1917, The Story of Prophets and Kings as Illustrated in the Capitvity and Restoration of Israel; Conflict of the Ages Series, Volume 2; Prophets and Kings p.486.

The next revised change is the meaning of the names of Daniel and the three worthies.

*Spelling – Worshipped was spelt “worshiped” in the book.

The paragraph below was deleted from the 1944 version p.25

The removed paragraph attributes and gives honor and glory to God in working a miracle in Daniel, Shadrach, Meshach and Abednego’s countenance and health.

The Lord regarded with approval the firmness and self-denial of the Hebrew youth, and their purity of motive; and His blessing attended them. He “gave them knowledge and skill in all learning and wisdom: and Daniel had understanding [BEGIN P.485] in all visions and dreams.” The promise was fulfilled, “Them that honor Me I will honor.” 1 Samuel 2:30. White, E. G. 1917, The Story of Prophets and Kings as Illustrated in the Capitvity and Restoration of Israel; Conflict of the Ages Series, Volume 2; Prophets and Kings p.484.

The paragraph below was deleted from the 1944 version p.27

Uriah Smith’s teaching about the word “unto”, or “until” was beneficial to me because when I went to the scripture references mentioned in Psalm 112:8 and Matthew 5:18 it helped me understand the law and commandments.

His heart is established, he shall not be afraid, until he see his desire upon his enemies.Psalm 112:8 King James Version.

For verily I say unto you, Till heaven and earth pass, one jot or one tittle shall in no wise pass from the law, till all be fulfilled. Matthew 5:18 King James Version

From these verses one can see that “until” or “till” does not mean “to continue no longer” but to direct especial attention.

This ends Chapter 1 comparison of “Daniel and the Revelation” by Uriah Smith.