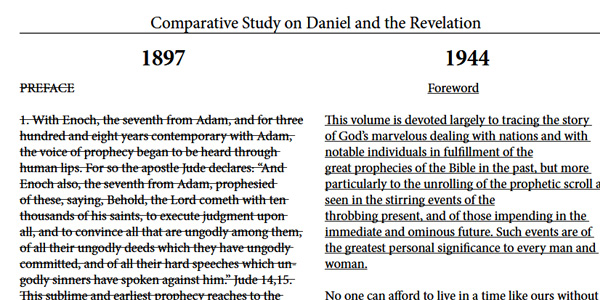 Uriah Smith was a Seventh-day Adventist author and theologian who wrote a book entitled “Thoughts on Daniel and the Revelation”. Mr. Smith died on March 6, 1903. In 1944, thirty one years after his death the Southern Publishing Association printed Uriah Smith’s book. Before the book went to the press it was edited. The editors are quoted as saying they put in much effort to “simplify and clarify the presentation of truth” and “to verify all historical and exegetical sources drawn upon by the author, and in notable instances to fortify the teaching by new evidence not available at the time of the original writing”. Daniel and the Revelation Comparative Study book seeks to simplify and clarify the changes that were made in the book so that the reader can better understand what Uriah Smith said compared to what the editors wrote in the 1944 edition.