Meddling with the Fundamental Principles 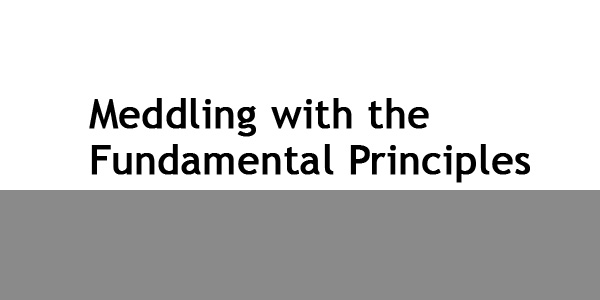 The Sadducees, came upon them, being grieved that they taught the people, and preached through Jesus the resurrection from the dead. And they laid hands on them, and put them in hold unto the next day. Acts 4:1-3.

The assertions made by the apostles that they had seen Jesus after His resurrection, and that He had ascended to heaven, were overthrowing the fundamental principles of the Sadducean doctrine. This was not to be allowed. The priests and rulers were filled with indignation, and laid their hands on the apostles and put them in the common prison. The disciples were not intimidated or cast down….

“The angel of the Lord by night opened the prison doors, and brought them forth, and said, Go, stand and speak in the temple to the people all the words of this life.” We see here that persons in authority are not always to be obeyed, even though they may profess to be teachers of Bible doctrines. There are many today who feel indignant and aggrieved that any voice should be raised presenting ideas that differ from their own in regard to points of religious belief. Have they not long advocated their ideas as truth? So the priests and rabbis reasoned in apostolic days. What mean these men who are unlearned, some of them mere fishermen, who are presenting ideas contrary to the doctrines that the learned priests and rulers are teaching the people? They have no right to meddle with the fundamental principles of our faith.

But we see that the God of heaven sometimes commissions people to teach that which is regarded as contrary to the established doctrines. Because those who were once the depositories of truth became unfaithful to their sacred trust, the Lord chose others who would receive the bright beams of the Sun of Righteousness, and would advocate truths that were not in accordance with the ideas of the religious leaders. And then these leaders, in the blindness of their minds, give full sway to what is supposed to be righteous indignation against the ones who have set aside cherished fables….

But the Holy Spirit will from time to time reveal the truth through its own chosen agencies; and no one, not even a priest or ruler, has a right to say, You shall not give publicity to your opinions, because I do not believe them. That wonderful “I” may attempt to put down the Holy Spirit’s teaching.—Letter 38, 1896.