God is NOT the Trinity Tract 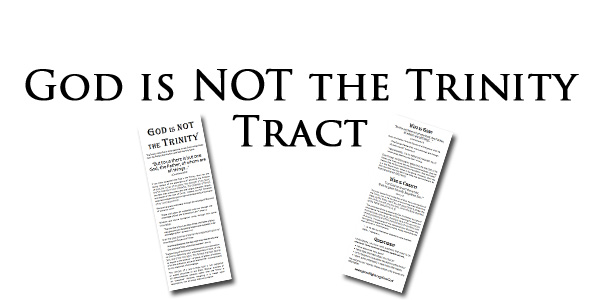 I’ve heard the ponderings of different people wondering about why God’s Ten Commandments are given in the negative, “Thou shalt NOT steal” and “Thou shalt NOT commit adultery” and “Thou shalt NOT have any  gods before me” etc.  They have said that they would’ve preferred it if God had stated His commands in the positive. It would have been more appealing, they’ve said, if God would’ve left it at “Love God with your whole heart and love your neighbour as yourself.”

Trying to communicate with people that Jesus truly is the Son of God, has given me insight into why God may have been so “negative” with the Ten Commandments. And here’s the insight: We cannot hear what we need to hear unless we are told in the “negative.” We don’t make the connections between our behaviour and the command unless it is given as clearly as it is in what NOT to do. Undoubtedly, the positive command to simply love your neighbour would be misconstrued, by more people than we care to admit, into justification for adultery by reasoning that it is okay for me to sleep with my neighbour’s wife because I only love her. Others would justify idolatry saying that it is only their own unique way to worship God. That’s why we need instructions on plastic bags telling us not to put them over babies’ heads. It can sometimes seem ridiculous, even offensive, but nonetheless, we need to be told. We are ever making the mistake of trying to do good, while crossing boundaries in other areas.

Making the connection between the problems with the doctrine of the Trinity and its attack on the truth needs to be plainly and directly stated, it seems, in the “negative”. My experience has been that people will listen to the truth that Jesus is truly the only begotten Son of God, and believe it, and confess it, and nod their heads in agreement as they listen, for it is plainly and obviously stated in the Scripture. Yet they will also believe and confess and nod their heads in agreement with the teachings of the Trinity. It is difficult to make the connection, or to have the realization, that we can’t believe both and be in harmony with God. The Trinity denies the truth that Jesus is the Christ, the only begotten Son of God. We cannot be of strong faith while we make room for error in our conviction of truth. We have to make a choice and either forsake the error, or forsake the truth.

This tract is the result of my challenges over my own failure to communicate effectively the contrast between the truth of the Son of God and the error of the Trinity. I have come to the point of being direct, and of leaving no room for private interpretation of what it is I’m saying to people. This is what I’m saying, “GOD IS NOT THE TRINITY! If you have accepted that God is the Trinity, then you are being robbed of your relationship to God.” We cannot entertain both beliefs and still know God. My hope is that this tract will be an effective jolt for those who are halting “between two opinions” and spur them on to seek and to make the choice,  “if the LORD be God, follow him: but if Baal, then follow him” (1Kings 18:21).

God is Not the Trinity tract- Web Version(126kb)

God is Not the Trinity tract – Print Version(113kb)