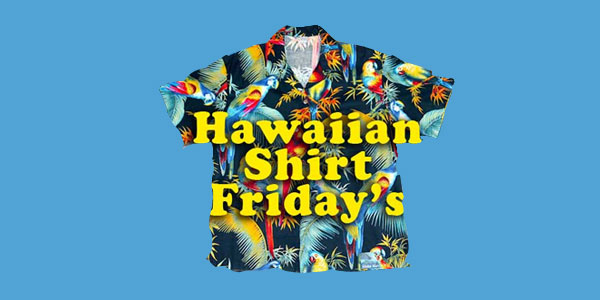 In Edmonton the temperature typically varies from -17°C to 24°C but that has not stopped my workplace from adopting the Hawaiian Shirt Friday tradition. Wikipedia defines this tradition as follows:

“Aloha Friday,” a now-common tradition of celebrating the end of the workweek by wearing more casual attire on Fridays, initially grew out of an effort to promote aloha shirts. Aloha shirt – Wikipedia

At work last last Friday I was asked by a co-worker why I wasn’t wearing a Hawaiian shirt. Being a Seventh-day Adventist the gentleman asking me the question was wondering why I was not participating in this seemingly harmless tradition and if it had anything to do with me being a Christian.

I shared the principle of modesty found in 1 Timothy 2:9

In like manner also, that women adorn themselves in modest apparel, with shamefacedness and sobriety; not with broided hair, or gold, or pearls, or costly array; 1 Timothy 2:9

My co-worker responded with it’s only for “fun”. Cannot Christians have a little fun and participate in some “harmless” tradition? I mentioned that Hawaiian shirts were flashy and I did not believe in wearing clothes that would bring unnecessary attention to myself.

I mentioned that back in high school before I was a Seventh-day Adventist I wore MC Hammer pants that were bright orange and had a big 2 foot pocket on the front of the pants. They were a very loose fitting flashy kind of apparel. The conversation moved on and it hasn’t been brought up again.

I didn’t stop thinking about what he said though which led me to ask myself a few questions:

Let us hear the conclusion of the whole matter: Fear God, and keep his commandments: for this is the whole duty of man. For God shall bring every work into judgment, with every secret thing, whether it be good, or whether it be evil. Ecclesiastes 12:13-14

And I saw another angel fly in the midst of heaven, having the everlasting gospel to preach unto them that dwell on the earth, and to every nation, and kindred, and tongue, and people, Saying with a loud voice, Fear God, and give glory to him; for the hour of his judgment is come: and worship him that made heaven, and earth, and the sea, and the fountains of waters. Revelation 14:6-7

The reason why I do not wear a Hawaiian Shirt on Friday’s is because we are in the day of investigative judgment.

The investigative judgment takes place in heaven before Christ comes, in order to ascertain who are worthy to be raised in the first resurrection, at His coming, and who among the living are “accounted worthy” to be changed in the “twinkling of an eye,” at the sounding of the last trump. Judgment Bible Study – Bible Readings for the Home (PDF 2mb)

It is a solemn time in earth’s history and if I were to wear Hawaiian clothes it would not be in harmony with the seriousness of the times the Bible says we are living in. With my clothes and my words I desire to let people know that Jesus is coming soon and now is the time to humble ourselves and get to know “the only true God and Jesus Christ whom thou hast sent” (John 17:3).

The next time someone asks me why I’m not wearing a Hawaiian shirt on Friday I can begin to share the truth of the three angels message about a judgment to come and the faith of Jesus, the only begotten Son of God to save us from the second death.

Perhaps I can let my co-worker know that I’m getting ready to be clothed in white raiment as it says in Revelation 3:5

He that overcometh, the same shall be clothed in white raiment; and I will not blot out his name out of the book of life, but I will confess his name before my Father, and before his angels. Revelation 3:5

Have you Christian had any experience in your personal life to see how modest clothing is connected to the preaching of the 3 Angels Messages?

What do the clothes you wear say about your faith in the Son of God?