Is the Seventh-day Adventist Trinity the Same Catholic Trinity? 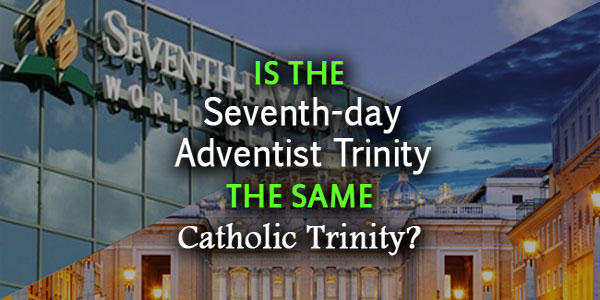 There are definite differences between the Catholic version of the Trinity and the Seventh-day Adventist version. Jets of Light does not deny this. There are also many similarities. The question to you reader is, do the differences mean we worship a different God than the Catholics? Do these differences mean that our version is closer to the truth? This is from the Catholic Encyclopedia found at http://www.newadvent.org/cathen/15047a.htm:

“The Trinity is the term employed to signify the central doctrine of the Christian religion — the truth that in the unity of the Godhead there are Three Persons, the Father, the Son, and the Holy Spirit, these Three Persons being truly distinct one from another.

Thus, in the words of the Athanasian Creed: “the Father is God, the Son is God, and the Holy Spirit is God, and yet there are not three Gods but one God.” In this Trinity of Persons the Son is begotten of the Father by an eternal generation, and the Holy Spirit proceeds by an eternal procession from the Father and the Son. Yet, notwithstanding this difference as to origin, the Persons are co-eternal and co-equal: all alike are uncreated and omnipotent. This, the Church teaches, is the revelation regarding God’s nature which Jesus Christ, the Son of God, came upon earth to deliver to the world: and which she proposes to man as the foundation of her whole dogmatic system.”

This is from the Seventh-day Adventist website found at https://www.adventist.org/en/beliefs/god/trinity/:

There is one God: Father, Son, and Holy Spirit, a unity of three coeternal Persons. God is immortal, all-powerful, all-knowing, above all, and ever present. He is infinite and beyond human comprehension, yet known through His self-revelation. God, who is love, is forever worthy of worship, adoration, and service by the whole creation.

Immortal, all-powerful and all-loving, God is a relationship of Father, Son and Holy Spirit. The only being worthy of our worship, God is our Creator, Redeemer and Friend.

And from our 28 Fundamentals:

All three are God, yet they are not three Gods, but one God.

There are differences between the Catholics’ Trinity and the Seventh-day Adventists’ Trinity, the eternal generation of the Son of God is one of them. But there are even bigger similarities, mainly, that God is a unity of three persons where all three persons are God, yet there is still only one God.

Many of our SDA brethren that I’ve talked to believe that our Trinity is so different from the Catholic Trinity that it means we are safe from Catholic errors. Yet the Catholics don’t see it this way. Despite the differences, they say, “Seventh-day Adventists agree with many Catholic doctrines, including the Trinity” (http://www.catholic.com/tracts/seventh-day-adventism).

According to the Catholics, we agree with their doctrine on the Trinity. So, to them, these differences don’t mean that much, or change the fundamental Trinity that we both worship.

For evidence that the foundational concept of the Trinity is the same for Seventh-day Adventists, Catholics and Protestants please look at the following four pictures:

Our Seventh-day Adventist bookstore has a large book entitled “Pictorial Aid for Bible Study” which has the following picture on page 74:

This picture is taken from a Catholic website which is the same picture except in black and white and surrounded by angels.

The third picture is from a very popular Protestant question and answer website called gotquestions.org. This picture shows the same concept as the Seventh-day Adventist symbol and the Catholic symbol above.

The symbol that is used by SDA’s, Catholics and Protestants is also known as the “shield of the Trinity.”

Mark Finely, the Vice President of Evangelism for the General Conference, agrees that the Godhead is a common doctrinal belief between our church and the Catholic church. In the book “Studying Together” on page 131, Mark Finley mentions the Godhead as one of the common beliefs held between Catholics and Seventh-day Adventists. Other common beliefs mentioned include, the Virgin Birth (although not the immaculate conception), the necessity of obeying God, the inspiration of the Bible, the second coming of Christ and the importance of prayer. I’m sure the Pastor would agree that there are differences (eternal generation of the Son) but the point is that he believes the foundation of the Trinity is a common doctrinal belief.

Why the Differences Don’t Mean that Much

The differences between the different versions of the Trinity that make the Seventh-day Adventist version unique don’t mean that much because the differences are about the details, not the foundational concept of the Trinity. Both the Catholic Church and the Seventh-day Adventist Church agree that God is a unity of three persons – three Gods yet not three Gods but one God. The details that proceed from this base can differ (eternal generation), but as long as the main teaching of the Trinity remains intact, that God is a unity of three persons, we believe in the same fundamental Trinity.