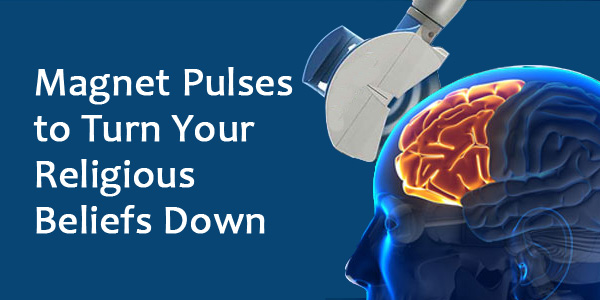 This mainstream article talks about how researchers are experimenting with how they can change people’s belief in God to make them more tolerant.

The decision to remind people of death, he says, was motivated by previous research on people’s habit of seeking out comfort in religion when presented with death. “As expected, we found that when we experimentally turned down the posterior medial frontal cortex, people were less inclined to reach for comforting religious ideas, despite having been reminded of death,” he said.
http://www.thedailybeast.com/articles/2015/10/14/this-magnet-could-change-everything-you-think-you-believe.html

A quick search on what the “frontal cortex” is all about:

The function of the frontal lobe involves the ability to project future consequences resulting from current actions, the choice between good and bad actions (or better and best), the override and suppression of socially unacceptable responses, and the determination of similarities and differences between things or events.
https://en.wikipedia.org/wiki/Frontal_lobe

While volunteering at Dr. Nedley’s Depression Recovery program it was impressed upon me how important it is to have a healthy functioning frontal lobe. Dr. Nedley, a Seventh-day Adventist has done extensive research on the frontal lobe. The article below does not specifically talk about transcranial magnetic stimulation but shows how caffeine also hinders the frontal lobe. I would encourage anyone to read the chapter on the frontal lobe. If one reasons from cause to effect it makes no sense in turning down a part of the brain that God has given us to help make choices between good and bad actions. Be thankful and grateful to God our Father and the Lord Jesus Christ the Son of God for your frontal lobe.

Dr. Neil Nedley’s, Proof Positive, in the Chapter: The Frontal Lobe: The Crown of the Brain.
http://iiomonline.com/caffeine_brain/
Simple advice. Please protect your crown. Not only your physical frontal lobe but your spiritual crown as well.

Henceforth there is laid up for me a crown of righteousness, which the Lord, the righteous judge, shall give me at that day: and not to me only, but unto all them also that love his appearing. 2 Timothy 4:8