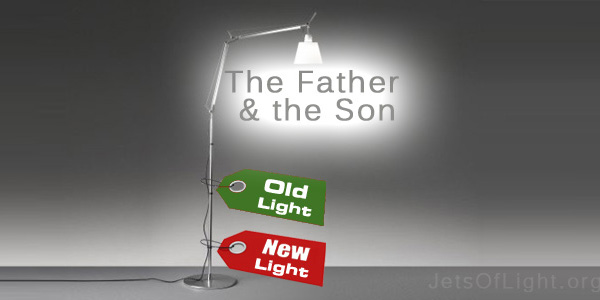 Dennis Priebe recently preached a sermon about the Trinity where he labelled the anti-trinity movement in the Seventh-day Adventist church as “new light”.

[1:19] So in the past thirty years I have received many compilations
[1:25] of new light for Seventh Day Adventists to consider and the necessity of studying
[1:31] these new ideas carefully and that is exactly what Ellen White said we should do.
[1:36] Some Seventh Day Adventists have taken these statements very seriously
[1:41] and they have come up with ideas new to Adventism.
…….
[5:52] that this morning. I’m going to move ahead quickly
[5:55] to the section that we are going to be dealing with right now.
[5:59] And that is the Trinity.
Dennis Priebe, New Light for Adventists, July 21, 2016 at the Hartland Summer Campmeeting in Rapidan, Virginia, USA.

Question: How would a person go about researching the claim that the anti-Trinity movement in the Seventh-day Adventist church is new light?

Answer: One way would be to find out what our church’s flagship publication, the Review and Herald historically said about the topic of the Trinity at the official archives of our church – SDA (astr).  Note: After you visit the archive website click on the magnify icon (see yellow arrow) and this will then highlight where the word Trinity is found in the periodical. Please research what our pioneers taught and said about the Trinity. Read the articles and see for yourself the reasons why they believed the way they did. Were their points reasonable and relevant for today? 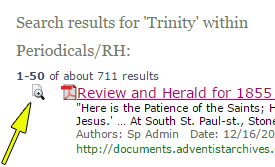 Question: What was the pioneers belief about God?

Answer: The pioneers did not believe the one God was a unity of 3 coeternal Persons. The pioneers believed the one God was “a personal, spiritual being and Jesus Christ was the Son of the Eternal Father. The one God is everywhere present by His representative, the Holy Spirit. The 1874 Fundamental Principles can be found by searching the “Signs of the Times” periodical volume 1, number 1, June 4, 1874 (Click the Signs of the Times link and then after the page opens, click on the magnify button to go straight to the synopsis of our once believed faith.)

After researching the archived Review and Herald and Signs of the Times periodicals what did you find?

The weight of evidence reveals that our church pioneers rejected the idea of God being a Trinity, whether it was a Catholic Trinity, a Protestant Trinity, or the so called Seventh-day Adventist Trinity. The pioneers viewed God as a personal being and not a unity of 3 coeternal Persons.

Officially, the following pioneers did not believe in the Seventh-day Adventist Trinity doctrine and were labelled anti-trinitarians:

Non-Trinitarianism in the SDA church was the standard position for a very long time. This position is not recent in origin.

For more information on the history of non-Trinitarianism in the Seventh-day Adventist church visit the Prophet Still Speaks website.