Put Out of the Synagogue Sermon Notes 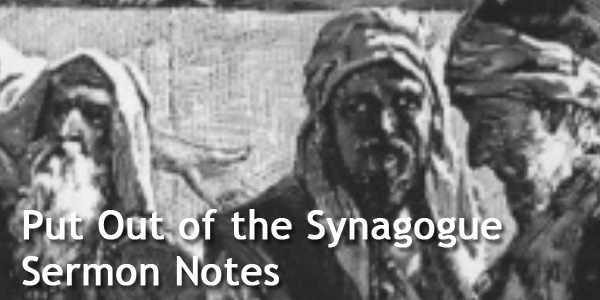 Two examples of this principle can be found in John 9.

As we go through John chapter 9 we will see that wrong definitions lead to a rejection of believing Jesus to be the Son of God.

Sermon title is “Put out of the Synagogue” – How is this phrase relevant in 2015? Is anyone afraid of being put out of the church today?

It may be a surprise to you but I personally know of 2 preachers that have been put out of the Seventh-day Adventist church for believing that Jesus is the Son of God.

Let’s now go to John chapter 9 and see what church members were believing that caused them to be put out of the synagogue.

John 9:18-22  But the Jews did not believe concerning him, that he had been blind, and received his sight, until they called the parents of him that had received his sight.  19  –  And they asked them, saying, Is this your son, who ye say was born blind? how then doth he now see?  20  –  His parents answered them and said, We know that this is our son, and that he was born blind:  21  –  But by what means he now seeth, we know not; or who hath opened his eyes, we know not: he is of age; ask him: he shall speak for himself.  22  –  These words spake his parents, because they feared the Jews: for the Jews had agreed already, that if any man did confess that he was Christ, he should be put out of the synagogue.

Why did the parents of the blind man fear the Jews who were the religious leaders?
Answer: If you confessed Christ you were put out.

What does confessing Christ mean?

1 John 4:14-15  And we have seen and do testify that the Father sent the Son to be the Saviour of the world.  15  –  Whosoever shall confess that Jesus is the Son of God, God dwelleth in him, and he in God.

Confessing Christ means believing that Jesus is the Son of God.

Note what it says in John 9:22. The Jews “already agreed”. This means it was a doctrine. It was a fundamental belief of the church

Many times when we are reading the Bible we think of the stories as old and don’t see the connection in our present day. Think about what this would be like for us. It would be like us opening the 28 Fundamental Belief book of our church and seeing that there is a doctrine that has been created that says your not allowed to believe that Jesus is the Son of God.

What wrong definition did the Jews have about Jesus? Let’s ready John 9:24

John 9:24  Then again called they the man that was blind, and said unto him, Give God the praise: we know that this man is a sinner.

How could they conclude that Jesus is a sinner? The reason we will see is because of the Jews definition of the Sabbath.

7.) One is not allowed to bathe on the Sabbath in water which is used exclusively for medicinal purposes, for it is obvious that one is using it as a cure. This is forbidden only when one lingers in it too long, but when one stays there only a short while, it is permissible, for it is clear that one was only cooling oneself. As to the hot springs of Tiberias, if people bathe in them exclusively as a cure, then bathing in them as a cure is forbidden, even when one does not linger in them.
Code of Jewish Law – A compilation of Jewish Laws and Customs Chapter 86 section 7

Notice that if one bathed on the Sabbath in water for a cure or “medicinal purposes” it was forbidden.

8.) One who has sore eyes must not apply to them tasteless saliva (that is, before one has tasted any food), because it is evident that he is doing it as a remedy. If, however, he is unable to open his eyes, he may moisten them with tasteless saliva, because this is not applied as a remedy but simply to enable him to open his eyes. – A compilation of Jewish Laws and Customs Chapter 91 section 8

Wrong definitions bring wrong conclusions.  Standing firm to the definitions they made regarding the Sabbath led them to see Jesus as a sinner instead of the Son of God (1 John 4:14-15).

Perversion of doctrine can lead to the rejection of believing Christ as the Son of God. Doctrine changes the way you see Christ.

If wrong definitions bring wrong conclusions how important do you think it is to properly define Jesus as being the “Son of God? Jesus is the center of the Bible. It is crucial to have the right definition of the Son of God.

Two main definitions that are being presented to Seventh-day Adventist Christians  that are totally opposite from one another are the following:

Jesus is the Son of God in truth

2 John 1:3  Grace be with you, mercy, and peace, from God the Father, and from the Lord Jesus Christ, the Son of the Father, in truth and love.

God the Father has a true Son

Matthew 3:17  And lo a voice from heaven, saying, This is my beloved Son, in whom I am well pleased.

The Son has a true Father in heaven

John 11:41  Then they took away the stone from the place where the dead was laid. And Jesus lifted up his eyes, and said, Father, I thank thee that thou hast heard me.

The Son of God was begotten

John 3:16  For God so loved the world, that he gave his only begotten Son, that whosoever believeth in him should not perish, but have everlasting life.

The Son of God inherits all things from His Father

Hebrews 1:2  Hath in these last days spoken unto us by his Son, whom he hath appointed heir of all things, by whom also he made the worlds;
John 3:35  The Father loveth the Son, and hath given all things into his hand.

2.) Son of God is to be taken metaphorically or as a role that Jesus takes on.

The definition of Jesus Christ taking on a role and not the literal Son of the Father.

“The divine beings entered into the roles they had agreed upon before the foundations of the world were laid” – Gordon Jensen – Adventist Review October 31, 1996 p.12

“The Father-Son relationship in the God head should be understood in a metaphorical sense, not in a literal sense.” – Max Hatton – Understanding the Trinity p.97

“Jesus became the Son of God at His human birth” – Max Hatton – Understanding the Trinity p.97

“They also took certain positions or roles to carry out the provisions of the plan” – Pastor Holbrook – These Times – Our Times, Frank Answers – June 1981

“The Father seems to act as source, the Son (act) as mediator, and the Spirit (act) as actualizer or applier – Seventh-day Adventists Believe… A Biblical Exposition of 27 Fundamental Doctrines 1988 – p24

“In the economy of function, different members of the Godhead perform distinct tasks in saving man.” – Seventh-day Adventists Believe… A Biblical Exposition of 27 Fundamental Doctrines 1988 – p24

“They have taken different roles or positions in the Godhead’s work of creation, redemption and the loving administration of the universe – Woodrow Whidden – The Trinity p.243

The Blind man challenges the religious leaders definition of Jesus.

John 9:30-33  The man answered and said unto them, Why herein is a marvellous thing, that ye know not from whence he is, and yet he hath opened mine eyes.  31  –  Now we know that God heareth not sinners: but if any man be a worshipper of God, and doeth his will, him he heareth.  32  –  Since the world began was it not heard that any man opened the eyes of one that was born blind.  33  –  If this man were not of God, he could do nothing.

The blind man responds to the religious leaders by saying Jesus can’t be defined as a sinner because God doesn’t hear sinners and a sinner could not heal a blind man. Your definition is wrong.

John 16:2  They shall put you out of the synagogues: yea, the time cometh, that whosoever killeth you will think that he doeth God service.

John 9:34  They answered and said unto him, Thou wast altogether born in sins, and dost thou teach us? And they cast him out.

I’m not saying this principle of discipline is wrong but the application is wrong.  If the religious leaders were defending truth their actions may have been correct but because they were defending error (calling Jesus a sinner) their actions were incorrect (excommunicating a person that believed Jesus was sent of God).

Among the grievous sins for which members shall be subject to church discipline are the following: 1. Denial of faith in the fundamentals of the gospel and in the cardinal doctrines of the church or teaching doctrines contrary to the same. – Seventh-day Church Manual Revised 2000 16th Edition p.184

Ellen White talked about the fundamental  doctrines of our church.

“There are many today who feel indignant and aggrieved that any voice should be raised presenting ideas that differ from their own in regard to points of religious belief. Have they not long advocated their ideas as truth? So the priests and rabbis reasoned in apostolic days. What mean these men who are unlearned, some of them mere fishermen, who are presenting ideas contrary to the doctrines that the learned priests and rulers are teaching the people? They have no right to meddle with the fundamental principles of our faith.

But we see that the God of heaven sometimes commissions people to teach that which is regarded as contrary to the established doctrines. Because those who were once the depositories of truth became unfaithful to their sacred trust, the Lord chose others who would receive the bright beams of the Sun of Righteousness, and would advocate truths that were not in accordance with the ideas of the religious leaders. And then these leaders, in the blindness of their minds, give full sway to what is supposed to be righteous indignation against the ones who have set aside cherished fables. . . .”  Ellen White – Christ Triumphant p.303

Brothers and Sisters we need to stand for truthful definitions even if it conflicts with the fundamental doctrines of a church.

What did Jesus think of people who stood for true definitions?

John 9:35  Jesus heard that they had cast him out; and when he had found him, he said unto him, Dost thou believe on the Son of God?

Jesus seeked and found the blind man who was standing for truthful definitions.

Be willing to examine your definitions in light of God’s word.

God would have all the bearings and positions of truth thoroughly and perseveringly searched, with prayer and fasting. Believers are not to rest in suppositions and ill-defined ideas of what constitutes truth. Their faith must be firmly founded upon the word of God, so that when the testing time shall come, and they are brought before councils to answer for their faith, they may be able to give a reason for the hope that is in them, with meekness and fear.  Ellen White – Counsels to Writers and Editors p.40

Will you Brothers and Sisters be willing to critically examine the positions of our fundamental beliefs and stand firm in the truth even if it means being put out of the synagogue to follow your convictions.