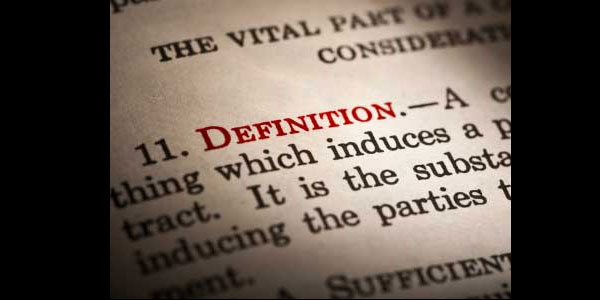 Seventh-day Adventist administration, theologians and leaders of the church have been redefining English words in order to uphold the now established Trinity doctrine of the Seventh-day Adventist Church. Words such as “Son of God”, “Arian”, “Begotten”, “Godhead”, “Heavenly Trio”.

Definitions of words are so important that in every Act and Regulation that Governments around the world use have in the body of the Act a section pertaining to definition of words.

Living in Edmonton, Alberta, Canada the government has an Act called the Hospitals Act. Quickly glancing at the Table of Contents reveals there are definitions included in each part of the Act. This 4 part Act has 5 sections solely devoted to definitions of words.

Looking at the Hospital’s Act as an example the word:

(i)    with reference to medical services provided in Alberta, a person registered as a regulated member of the College of Physicians and Surgeons of Alberta under the Health Professions Act who holds a practice permit issued under that Act, and

(ii)    with reference to medical services provided in a place outside Alberta, a person lawfully entitled to practise medicine or osteopathy in that place;

Question. Would Jesus Christ qualify as a Physician in the Hospitals Act of Alberta?
Answer: No.

Can you see the implications of a theologian changing the definition of a word and how it could change the Bible even though the words have not changed?

Did the Scribe’s and Pharisee’s try to redefine words?

How about there definition of keeping the Sabbath day holy.

But when the Pharisees saw it, they said unto him, Behold, thy disciples do that which is not lawful to do upon the sabbath day. Matthew 12:2

How about there definition of “honoring your father and mother”?

But he answered and said unto them, Why do ye also transgress the commandment of God by your tradition? For God commanded, saying, Honour thy father and mother: and, He that curseth father or mother, let him die the death. But ye say, Whosoever shall say to his father or his mother, It is a gift, by whatsoever thou mightest be profited by me; And honour not his father or his mother, he shall be free. Thus have ye made the commandment of God of none effect by your tradition.
Matthew 15:3-6

Did those religious leaders have control in many ways over the meaning of the whole Bible and how it was to interpreted?

Words are important. Definitions are critical for knowing truth.

What does “Son of God” truly mean? Is it literal or figurative. How readest thou? Are theologians tampering with definitions of God’s word?

Perhaps this may sound like another conspiracy theory to you?

Allow me to share a couple of real life example of experts, leaders and men and women of influence trying to change definitions of words to further their goals.

“The federal government wants to reduce the number of Americans diagnosed each year with cancer. But not by better preventive care or healthier living. Instead, the government wants to redefine the term “cancer” so that fewer conditions qualify as a true cancer.” Forbes Magazine – Why The Federal Government Wants To Redefine The Word ‘Cancer’ – Paul Hsieh, September 29, 2013

If Forbes Magazine is not enough to show that leaders are using words to redefine reality how about the New York Times article talking about the highest leader in the country, the President of the United States redefining the word “combatant”

“It is also because Mr. Obama embraced a disputed method for counting civilian casualties that did little to box him in. It in effect counts all military-age males in a strike zone as combatants, according to several administration officials, unless there is explicit intelligence posthumously proving them innocent.” New York Times – Secret ‘Kill List’ Proves a Test of Obama’s Principles and Will – Jo Becker and Scott Shane – May 29, 2012

“This counting method may partly explain the official claims of extraordinarily low collateral deaths. In a speech last year Mr. Brennan, Mr. Obama’s trusted adviser, said that not a single noncombatant had been killed in a year of strikes.” ibid.

Now as never before Seventh-day Adventist Christians need to come back to the Bible and study what God’s Word is saying rightly dividing the word of truth. Do not allow any leader, administrator or theologian to redefine terms and interpret scripture based on sectarian training and preconceived ideas.

I would like to encourage you to begin your study with John 17:3 as your starting point.

And this is life eternal, that they might know thee the only true God, and Jesus Christ, whom thou hast sent.
John 17:3

The Son of God is being redefined. Is He still your Great Physician or is He being metaphorically transformed into someone other than the Son of the living God (John 6:69)?