Steps to Christ by Ellen White – Trinitarian or Non-Trinitarian Book? 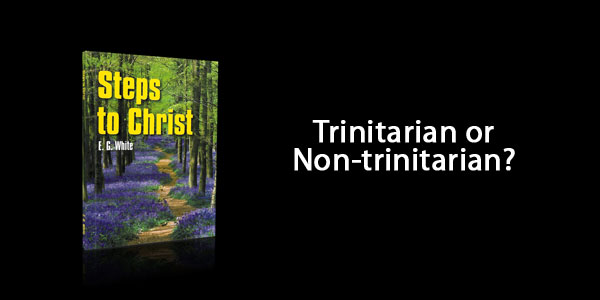 Steps to Christ is one of my favorite books. If I am feeling down or discouraged I enjoy picking up this book and reading it to help me draw closer to my Savior and friend. I would encourage everyone to read and reread this book.

Many people may not have thought about it before but this book is a non-Trinitarian book. The book does not teach a 3-in-1 and 1-in-3 God. This book teaches that God is the Father and Jesus Christ is the Son of the living God.

For God so loved the world, that he gave his only begotten Son, that whosoever believeth in him should not perish, but have everlasting life. John 3:16

I began reading the first chapter a couple of weeks ago and saw something beautiful that I believe many people pass by. The first chapter is entitled God’s Love for Man. In this chapter it talks about God’s love for man. It is interesting how the chapter is setup. The first 5 paragraphs talk about the Father. The next 5 paragraphs talk about the Son of God. The remaining paragraphs then talk about the Father and the Son together. Chapter one of Steps to Christ does not uphold the Trinitarian concept of God’s love that we are being taught from the Seventh-day Adventist pulpit. I will leave you with the 1st chapter below to read for yourself and ponder the following 7 points.

Enjoy reading the chapter and may you truly be touched by God’s love in sending His only begotten Son for you personally.

Nature and revelation alike testify of God’s love. Our Father in heaven is the source of life, of wisdom, and of joy. Look at the wonderful and beautiful things of nature. Think of their marvelous adaptation to the needs and happiness, not only of man, but of all living creatures. The sunshine and the rain, that gladden and refresh the earth, the hills and seas and plains, all speak to us of the Creator’s love. It is God who supplies the daily needs of all His creatures. In the beautiful words of the psalmist–

“The eyes of all wait upon Thee;
And Thou givest them their meat in due season.
Thou openest Thine hand,
And satisfiest the desire of every living thing.”
Psalm 145:15, 16. {SC 9.1}