The Father and the Son Alone are to be exalted 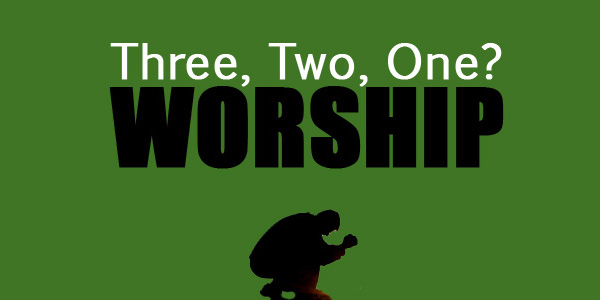 Trinitarians are confused. They are teaching that there are three beings who are God and at the same time teaching there is one God. Dennis Priebe a Seventh-day Adventist Pastor recently shared a message on the Trinity and he was against the idea that there are only two beings who are worthy of worship. The Pastor thought worshiping only two beings was error. The SDA Pastor proclaimed,

“There are three beings that are God and yet there is one God. This is one of the great mysterious teachings of Scripture that even today we have a hard time wrapping our minds around.” Dennis Priebe, New Light for Adventists sermon, July 21, 2016, Hartland Summer Campmeeting, Rapidan, Virginia, USA.

Seventh-day Adventist trinitarians are confused because they have set themselves up to defend the Trinity. They see God as a mystery: 3-in-1 and 1-in-3. The current doctrine of God in our church is that God is a unity of three co-eternal Persons. But Seventh-day Adventists are looking at the Bible with Trinity colored glasses. How can I say that? Because I use to believe in the Trinity doctrine. I assumed it was true, not because of solid Bible verses proving the Trinity, but more because I believed the church to be the true church and that she could not err. I believed in the Trinity because all the Pastors that I trusted weren’t saying anything against it. If Doug Batchelor, Walter Veith, Stephen Bohr, Mark Finley and David Asscherick were not talking against it then it must be right. These evangelists could not be wrong on any doctrine…..could they?

Listed below are three questions that will help the honest Bible student to know how many beings are worthy of our worship.

Question #1: Does the Bible teach that there are only two beings who are worthy of worship?

We need to know two Divine Beings to have eternal life. God, who is the Father. and His Son Jesus Christ:

And this is life eternal, that they might know thee the only true God, and Jesus Christ, whom thou hast sent. John 17:3

Two Divine Beings sit on thrones. God, who is the Father, and His Son Jesus Christ:

And he shewed me a pure river of water of life, clear as crystal, proceeding out of the throne of God and of the Lamb. Revelation 22:1

And there shall be no more curse: but the throne of God and of the Lamb shall be in it; and his servants shall serve him: Revelation 22:3

.Do you see a pattern forming? Two Divine Beings have a kingdom. God who is the Father and His Son Jesus Christ:

For this ye know, that no whoremonger, nor unclean person, nor covetous man, who is an idolater, hath any inheritance in the kingdom of Christ and of God. Ephesians 5:5

Please critically examine your belief about God being a unity of 3 co-eternal persons. The Bible is not revealing a Trinity. The SDA pioneers including Ellen White were correct in their understanding. We didn’t have to change as a church 36 years ago. We changed positions for the worse. It’s time to come back to the pillars of our faith.

The enemy of souls has sought to bring in the supposition that a great reformation was to take place among Seventh-day Adventists, and that this reformation would consist in giving up the doctrines which stand as the pillars of our faith, and engaging in a process of reorganization. Were this reformation to take place, what would result? The principles of truth that God in His wisdom has given to the remnant church, would be discarded. Our religion would be changed. The fundamental principles that have sustained the work for the last fifty years would be accounted as error. A new organization would be established. Books of a new order would be written. A system of intellectual philosophy would be introduced. The founders of this system would go into the cities, and do a wonderful work. The Sabbath, of course, would be lightly regarded, as also the God who created it. Nothing would be allowed to stand in the way of the new movement. The leaders would teach that virtue is better than vice, but God being removed, they would place their dependence on human power, which, without God, is worthless. Their foundation would be built on the sand, and storm and tempest would sweep away the structure. {Ellen White, 1904, SpTB02 54.3}

Please search the Scriptures whether these things are so. Please reread the passages above and notice that God does not equal a plurality but a personal Being, and Jesus Christ is the Son of the personal Being we call God. Two Divine Beings.

Here are a few more Scriptures all pointing in the same direction that the Father and Son alone are to be exalted.

Question #2: Do the writings of Ellen White teach that there are only two beings who are worthy of worship?

“And Jesus increased his wisdom and stature, and in favor with God and man.” Let the brightest example the world has yet seen be your example, rather than the greatest and most learned men of the age, who know not God, nor Jesus Christ whom he has sent. The Father and the Son alone are to be exalted. {Ellen White, Youth Instructor, July 7, 1898 par. 2}

The Son of God shared the Father’s throne, and the glory of the eternal, self-existent One encircled both. About the throne gathered the holy angels, a vast, unnumbered throng–“ten thousand times ten thousand, and thousands of thousands” (Revelation 5:11.), the most exalted angels, as ministers and subjects, rejoicing in the light that fell upon them from the presence of the Deity. Before the assembled inhabitants of heaven the King declared that none but Christ, the Only Begotten of God, could fully enter into His purposes, and to Him it was committed to execute the mighty counsels of His will. The Son of God had wrought the Father’s will in the creation of all the hosts of heaven; and to Him, as well as to God, their homage and allegiance were due. Christ was still to exercise divine power, in the creation of the earth and its inhabitants. But in all this He would not seek power or exaltation for Himself contrary to God’s plan, but would exalt the Father’s glory and execute His purposes of beneficence and love. {Ellen White, Patriarchs and Prophets, p.36.2}

Before the entrance of evil there was peace and joy throughout the universe. All was in perfect harmony with the Creator’s will. Love for God was supreme, love for one another impartial. Christ the Word, the Only Begotten of God, was one with the eternal Father,–one in nature, in character, and in purpose,–the only being in all the universe that could enter into all the counsels and purposes of God. By Christ the Father wrought in the creation of all heavenly beings. “By Him were all things created, that are in heaven, . . . whether they be thrones, or dominions, or principalities, or powers” (Colossians 1:16); and to Christ, equally with the Father, all heaven gave allegiance. {Ellen White, Great Controversy, p.493.1}

The Father and the Son engaged in the mighty, wondrous work they had contemplated–of creating the world. {Ellen White, The Story of Redemption p.20}

After the earth was created, and the beasts upon it, the Father and Son carried out their purpose, which was designed before the fall of Satan, to make man in their own image. They had wrought together in the creation of the earth and every living thing upon it. {Ellen White, The Spirit of Prophecy Volume One p.24}

Please do not overlook these quotes. Take time to see if they harmonize with your current belief about God. If the Scriptures and Ellen White’s writings clearly show two beings alone are to be exalted then please critically examine your belief about the Trinity. God is not calling you to defend the new creed of your church. You do not need to defend a 3-in-1 God and say it’s mysterious. God is calling you to stand on His Word. Pastor’s are human. Sincere pastors can be sincerely wrong hence the counsel to study to show thyself approved.

Question #3: Does the truth about the Holy Spirit being the Spirit of Christ reveal that there are only two beings who are worthy of worship?

Adventists can hold to the truth that “The Father and the Son alone are to be exalted” and at the same time believe in the “heavenly trio” because the heavenly trio consists of the Father, and the Son, and the Spirit of Christ.

All the Scriptures that you once thought proved 3 separate beings now harmonize with the truth that life eternal consists of knowing 2 Divine Beings, the one true God and Jesus Christ whom He has sent (John 17:3.)

In summary, the Bible teaches two beings, the spirit of prophecy teaches two beings, and the understanding of the Holy Spirit being the Spirit of Christ teaches two beings. The one true God is to be worshipped. God is a personal being who is our Father in heaven. And the Father has a Son who is also worthy of our worship because He is the Son of God.

Then they that were in the ship came and worshipped him, saying, Of a truth thou art the Son of God. Matthew 14:33

God, who at sundry times and in divers manners spake in time past unto the fathers by the prophets, Hath in these last days spoken unto us by his Son, whom he hath appointed heir of all things, by whom also he made the worlds; Who being the brightness of his glory, and the express image of his person, and upholding all things by the word of his power, when he had by himself purged our sins, sat down on the right hand of the Majesty on high; Being made so much better than the angels, as he hath by inheritance obtained a more excellent name than they. For unto which of the angels said he at any time, Thou art my Son, this day have I begotten thee? And again, I will be to him a Father, and he shall be to me a Son? And again, when he bringeth in the firstbegotten into the world, he saith, And let all the angels of God worship him. Hebrews 1:1-6