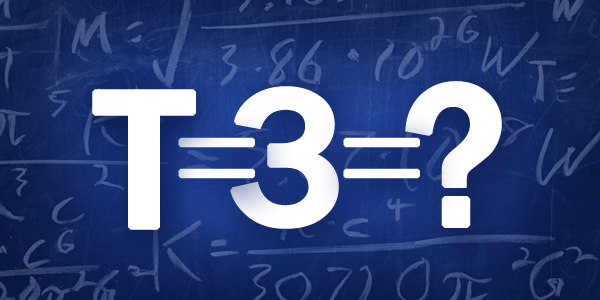 The doctrine of the Trinity has been defended with the argument that “the word Trinity just means three.” While this is correct, it is also incorrect. The word trinity does mean three of something. It has been used this way in our own Seventh-day Adventist periodicals:

“Let every one of us heed for himself the admonition, Watch and pray, and every one for himself seek a speedy victory over that dread trinity of sin, the World, the Flesh, and the Devil.” Review and Herald, October 22, 1857

The word trinity does simply mean three of something. Here it refers to the three advocates of sin – the world, the flesh, and the Devil.
But what about when we put a capital “T” on the word and use it to describe and name God? When this happens a trinity of problems emerge:

If Trinity simply means three, then, without adding to or departing from this definition, prove to me that this is not tri-theism. If Trinity simply means three, then three Gods are the subject of worship –  1. God the Father, 2. God the Son, and 3. God the Holy Spirit. The “one” in the “one Lord” (Hear, O Israel: The LORD our God is one LORD: Deuteronomy 6:4) is out of the equation. We just have “three.”

If the insistence is made that one God is still worshiped then the word trinity no longer simply means three. It means three in one. It means three Gods in one God. The meaning of the word “trinity” has changed. It means something different than just three. It takes on an entirely new meaning when naming and describing God.
If the reader persists arguing that “trinity” means three of something, or a group of three, and that this is correctly applied to a God (group) who is three Gods, then I repeat myself. This is true to the historical definition of the word, but it causes problems when applied to naming and describing God, because…

God is a personal Being.

“And this is life eternal, that they might know thee the only true God, and Jesus Christ, whom thou hast sent.” John 17:3

Have we not all one father? hath not one God created us? why do we deal treacherously every man against his brother, by profaning the covenant of our fathers? Malachi 2:10

And the scribe said unto him, Well, Master, thou hast said the truth: for there is one God; and there is none other but he: Mark 12:32

Seeing it is one God, which shall justify the circumcision by faith, and uncircumcision through faith. Romans 3:30

One God and Father of all, who is above all, and through all, and in you all. Ephesians 4:6

For there is one God, and one mediator between God and men, the man Christ Jesus; 1 Timothy 2:5

Thou believest that there is one God; thou doest well: the devils also believe, and tremble. James 2:19

“The Lord is the true God, He is the living God, and an everlasting King…” Jeremiah 10:10

“He (Christ) did not represent God as an essence pervading nature, but as a personal being. Christians should bear in mind that God has a personality as verily as has Christ.” Ellen White, SpM 324.2

“The inexplicable trinity that makes the godhead three in one and one in three, is bad enough; but that ultra Unitarianism that makes Christ inferior to the Father is worse. Did God say to an inferior, ” Let us make man in our image ?” Review and Herald, November 29, 1877

A three one God was rejected, along with the Unitarian view that Christ is inferior to God, because the doctrine destroys the personality of God. This doctrine was classed as the wine of Babylon:

“The cause of the fall of Babylon is thus stated: “she made all nations drink of the wine of the wrath of her fornication.” Her fornication was her unlawful union with the kings of the earth. The wine of this, is that with which the church has intoxicated the nations of the earth. There is but one thing that this can refer to; viz., false doctrine. This harlot, in consequence of her unlawful union with the powers of earth, has corrupted the pure truths of the Bible, and with the wine of her false doctrine,has intoxicated the nations. A few instances of her corruption of the truths of the Bible must suffice:
1. The doctrine of the natural immortality of the soul… It is the foundation of modern spiritualism.
2. The doctrine of the Trinity which was established in the church by the council of Nice, A. D.325. This doctrine destroys the personality of God,and his Son Jesus Christ our Lord. The infamous measures by which it was forced upon the church which appear upon the pages of ecclesiastical history might well cause every believer in that doctrine to blush.”   Review and Herald, March 6, 1855

When applied to God, Trinity does not simply mean three. It means one God who is three Gods. If you reasonably about think about it and honestly hold it up to the scriptural light, you will find this doctrine as absurd as our pioneers did.

“As a personal being, God has revealed Himself in His Son.” Ellen White, 9MR 122.2
“Blessed be the God and Father of our Lord Jesus Christ…” Ephesians 1:3

“Blessed be the God and Father of our Lord Jesus Christ…” 1Peter 1:3″

The God and Father of our Lord Jesus Christ…” 2Corinthians 11:31