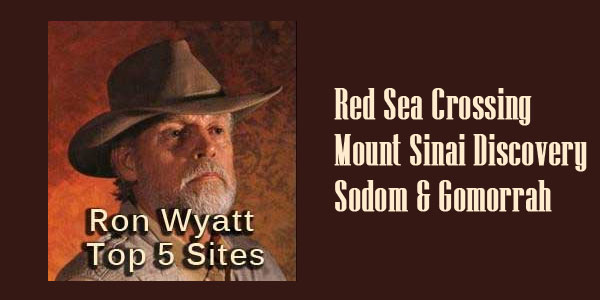 Back in 2000 I went to a friends house and there for the first time was shown pictures of a few of Ron Wyatt’s discoveries. My current frame of mind was that all religions are equal and it doesn’t matter what you believe because we are all moving upwards just at a different pace from each other. I believed if you are a Buddhist, Hindu, Muslim or a New Age Spirtualist we were all in the same boat and just looking at God from different points of view (See a video I put together about the Blind men and elephant parable).

My picture changed completely after watching Ron Wyatt’s video about the Red Sea Crossing and Noah’s Ark along with the Ark of the Covenant presentation and finally the Sodom and Gomorrah documentary. Here was evidence that drew me to the Bible like I never seen before.

The friend who showed me his wall mounted pictures was impressed so much by the info that he put his own powerpoint presentation together regarding these discoveries. I am going to look in my archives to see if I still have a copy to upload to the website.

Here are the top 5 websites for Ron Wyatt’s Discoveries:

This website is the official website of Ron Wyatt. Ron Wyatt died back in 1999 and the ministry that still continues presenting the information that by God’s grace was given to him. I would encourage you to purchase these DVD’s for yourself. They are not free but reasonable for the information provided.

This website also sells a DVD but the difference is that they also uploaded their DVD on YouTube for you to watch for free.

This hour documentary shows the implication of Ron Wyatt’s discoveries and is well presented. You may also download the video from Vimeo to keep on your computer for sharing and witnessing to others. The video shows how Wyatt’s discoveries harmonize with the Bible’s identification of the anti-christ and the mark of the beast. Please watch the first 5 minutes of this video and I don’t think you will stop. The documentary also shows some rare footage of Ron Wyatt giving a archaeological presentation in a cave. Hope you enjoy it.

Testimony of the Ark from Carl Erik Tengesdal on Vimeo.

Film about the importance of the Ark of the Covenant. And also about how the antichrist will set himself in the temple of God as if he was God himself.

The Bible says “At the mouth of two witnesses, or at the mouth of three witnesses shall the matter be established (Deu 19:15)” . With this in mind I would like to share some corroborating evidence for Ron Wyatt’s discoveries. In this 54 minute video Missionary Pilot David Gates interviews a Korean physician by the name of Dr. Kim that verified some of the data that Ron Wyatt shared. This is a simple video recording and therefore the audio is not crystal clear but the information more than makes up for it.

I hope you appreciate the information and that it draws you closer to our Lord and Saviour Jesus Christ. Jesus is coming soon and He has given more than enough evidence for those who “desire” to believe the truth. John 7:17 “If any man will do his will, he shall know of the doctrine, whether it be of God, or whether I speak of myself“. Many years ago I began a tract ministry creating business card evangelism tracts and giving them away free. They were called truth cards and as people began to share them I had this one gentleman write to me saying “If you don’t take down the links about Ron Wyatt and the information about him I will not financially support your ministry”. I was not as faithful back then and cowered under his threat. It is with regret and sadness that I have not shared this information until now. I hope that if you experience “persecution” for the the truth’s sake that you stand firm in your convictions.

I am a Seventh-day Adventist and have seen this information be belittled and downplayed by many even in my own church.

William H. Shea who is a retired associate director of the Biblical Research Institute shares his doubt with the following quote:

Ron has picked out Jebel el Lawz in Saudi Arabia for his Mt. Sinai, in part because it lines up with his crossing point and in part because there are carvings on the rocks there. None of the rock drawings are definitive, however, and thus there is no definite demonstration that the Israelites were there. I have finally seen the photographs of this place published in a book and did not see anything distinctively Israelite there. In addition such a site requires a tremendous stretching of the Israelite route, does not have any good site identifications along the way like the Sinai site does, and ignores the fact that an Israelite inscription from the period of the Exodus has been found in the traditional Mt. Sinai area in the Sinai peninsula. It may be that the site in Saudi Arabia may be archaeologically interesting or significant but that does not prove it to be the biblical Mt. Sinai. (http://www.tentmaker.org/WAR/Shea.html)

Dr. Shea has many years more schooling and education than I do but when he talks about Ron Wyatt’s discoveries the information he provides gives me no solid reason why it is not possible for the discoveries to be as Ron Wyatt recorded. William Shea provides doubt if you don’t want to believe but if one watches “The Exodus Revealed” video and look’s at the common/normal Exodus route crossings I personally can’t see why one would think those are better possibilities.

I am planning on purchasing a few high quality pictures of a few of these discoveries to mount at my wall at work for possible show and tell opportunities. The links below are some pictures that I have gathered over the last little while.

http://www.panoramio.com/user/4799253 (Excellent pictures of some of Ron Wyatt’s discoveries and free)

Have you come across other Ron Wyatt videos that are worth watching? Feel free to post your thoughts in the comment section below.