Uriah Smith’s Daniel and the Revelation Comparison 1904 vs 1944 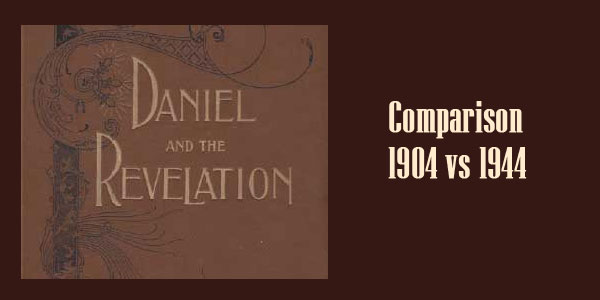 The amount of people who have requested the list of changes that have taken place for Uriah Smith’s Daniel and Revelation book has been significant. After many years I have taken the first 119 pages of the 1897 version and have compared it with the 1944 version. The results are interesting.

There are many grammatical changes that have taken place. Most do not effect the book one way or the other. But interspersed throughout these “tiny” changes are alterations that do change the book and intention of the author. Starting this project has revealed to me that the owners of Uriah Smith’s book desired to create a derivative work. According to the U.S. Copyright office a derivative work is defined as:

To be copyrightable, a derivative work must incorporate some or all of a preexisting “work” and add new original copyrightable authorship to that work. The derivative work right is often referred to as the adaptation right. The following are examples of the many different types of derivative works:
…
A revision of a previously published book

After looking at the 985 changes in the first 119 pages I believe the new edition of Uriah Smith’s Daniel and Revelation is about changing the original for copyright purposes as well as to change any part of the book that the historical revisionists desired to “improve”. Based on U.S. copyright law the copyright owner of a book has the right to modify any part of the book. For example if the editors desire to replace Uriah Smith’s preface with their own, they have that right. On page 25 when the original says that Jerusalem was “carried captive to Babylon, B.C. 588”, the editors have the freedom to change the date to 586.

Uriah Smith on page 28 mentioned that the name “Mishael” signified “he that is a strong God” but the editors thought it was an improvement to change it to “who is what God is”. The pages of 58-61 in the original are not to be found in the new edition. Uriah Smith referenced “Rollin, Ancient History” on page 117 but the revisionists thought it an improvement to reference “The Cambridge Ancient History, Vol. VI” instead.

To download and view the changes of the first 119 pages of the book (17.4mb): Daniel and the Revelation Book by Uriah Smith – Revision Changes

The reason why only 119 pages are shown here is due to the vast amount of small changes that have been made in the 1944 revision. It would require a lot more time to continue to the end. You will notice that having over 900 changes marked in the PDF is very resource intensive. I cannot imagine how many changes there would be if one marked up the whole PDF. One project that may now be helpful is to go through the book only marking the changes that reference trinitarian ideas.

Here are a few Ellen White quotes regarding Uriah Smith’s book “Daniel and The Revelation” (notice all these quotes came before 1904):

In the Desire of Ages, Patriarchs and Prophets, and in Daniel and the Revelation, There is precious instruction. These books must be regarded as of special importance, and every effort should be made to get them to the people.- Letter 229,1903 – Colporteur Ministry pg.123.2

The light given was that Thoughts on Daniel and The Revelation, The Great Controversy, and Patriarchs and Prophets, would make their way. They contain the very message the people must have, the special light God had given His people. The angels of God would prepare the way for these books in the hearts of the people.- Special Instruction Regarding Royalties, p.7 (1899) – Colporteur Ministry pg.123.3

Daniel and Revelation, Great Controversy, Patriarchs and Prophets, and Desire of Ages should now go to the world. The grand instruction contained in Daniel and Revelation has been eagerly perused by many in Australia. This book has been the means of bringing many precious souls to a knowledge of the truth. Everything that can be done should be done to circulate Thoughts on Daniel and Revelation. I know of no other book that can take the place of this one. It is God’s helping hand.–MS 76, 1901. – The Publishing Ministry pg.356.2

Let our canvassers urge this book upon the attention of all. The Lord has shown me that this book will do a good work in enlightening those who become interested in the truth for this time. Those who embrace the truth now, who have not shared in the experiences of those who entered the work in the early history of the message, should study the instruction given in Daniel and the Revelation, becoming familiar with the truth it presents. Manuscript Releases Volume One pg.61.1

Young men, take up the work of canvassing for Daniel and the Revelation. Do all you possibly can to sell this book. Enter upon the work with as much earnestness as if it were a new book. And remember that as you canvass for it, you are to become familiar with the truths it contains. As you ponder these truths, you will receive ideas that will enable you not only to receive light, but to let light shine forth to others in clear, bright rays. Manuscript Releases Volume One pg.63.3

A quick search to find the 1904 printed date version (which is the 1897 version) produced successful results at MaranathaMedia.com

My wife and I also happened to have the 1944 version soft cover so we were ready to compare. I would read the 1904 printed date version and my wife would listen and read the 1944 version. Whenever we would come to rewording, additions or deletions we would stop and talk about them. Stay tuned for a chapter by chapter insight comparing Uriah Smith’s original with the revised edition of Daniel and the Revelation.