Why Change Daniel and the Revelation Book? 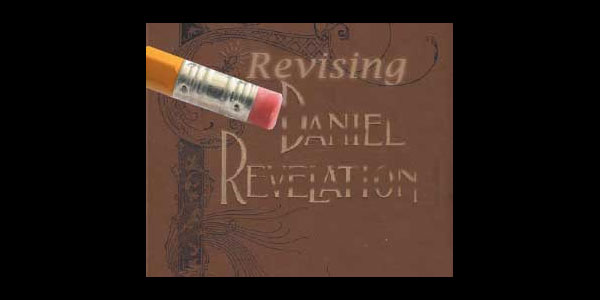 Today I came across interesting information on the reason why the Book “Daniel and the Revelation” was revised and so called “corrected”.

The next logical and inevitable step in the implementing of our unified “Fundamental Beliefs” involved revision of certain standard works so as to eliminate statements that taught, and thus perpetuated erroneous views on the Godhead. Movement of Destiny – LeRoy Froom p422

These productions must therefore be brought into harmony with the NOW declared Faith of the Church. Movement of Destiny – LeRoy Froom p422

The first reason presented for changing the book was to eliminate Uriah Smith’s view of the Godhead.

My wife and I are in chapter 2 of the book and we will now proceed to read with the awareness of what was taken out of the book in relation to the Godhead.

I’m curious to learn more about Uriah Smith’s belief about the Godhead that was so out of harmony with the “now declared Faith of the Church”.

I find it very interesting that Ellen White and the conference endorsed Uriah Smith’s book very highly with quotes such as this one:

The light given was that Thoughts on Daniel and The Revelation, The Great Controversy, and Patriarchs and Prophets, would make their way. They contain the very message the people must have, the special light God had given His people. The angels of God would prepare the way for these books in the hearts of the people.- Special Instruction Regarding Royalties, p.7 (1899) {CM 123.3}

I also found some very disturbing information regarding a quote that Mr. Froom used to defend the action to revise Daniel and the Revelation.

LeRoy Froom in his book shared:

The disturbing part is what the full quote actually says:

The work that the Lord has given us at this time is to present to the people the true light in regard to the testing questions of obedience and salvation–the commandments of God and the testimony of Jesus Christ.

In some of our important books that have been in print for years, and which have brought many to a knowledge of the truth, there may be found matters of minor importance that call for careful study and correction. Let such matters be considered by those regularly appointed to have the oversight of our publications. Let not these brethren, nor our canvassers, nor our ministers magnify these matters in such a way as to lessen the influence of these good soul-saving books. Should we take up the work of discrediting our literature, we would place weapons in the hands of those who have departed from the faith and confuse the minds of those who have newly embraced the message. The less that is done unnecessarily to change our publications, the better it will be.

In the night seasons I seem to be repeating to my brethren in responsible positions, words from the First Epistle of John. {Chapter 1 is quoted.}

Is the Godhead a minor matter?

I am unsettled when a Ellen White quote is taken out of context which I personally believe was done here. If the matter is of major importance (like the teaching of the Godhead) rather than change the words of a dead man why not remove the book from the Seventh-day Adventists book of recommended reading?